I woke up that morning quite early. I had a meeting with some clients at the other end of the city, with my boss, and was already running late. A habit of mine

It dawned on me that in the upcoming days I was getting kicked out of the student accommodations I had called home since I initially moved to Munich.

While I would not miss the odd smell I couldn’t identify or whose origin I could not locate in the near 8 months I lived there, the small size of my room, or the one and a half square meter I called my kitchen, I would still miss it.

This is where my former roomie, met in Canada, lived with her boyfriend. A small world indeed. It’s also where my first few friends lived: Ole, Celia, Micha and all the crazy people we hung out with.

-The “Manhattan” bar on top of the tallest building, overlooking the capital of Bavaria.

-The “Tribühne” bar where we would get free hamburgers on wednesday nights from the backdoor, freshly “borrowed” by the cook, Celia….

-The “Potschamperl”, where I had my first “Ampel party mit ficken” (Street light party with fucking, don’t ask) and all the cheap 2€ meals that tasted like my mom cooked em’, but in fact it was my floor mate Jessica, the one who loved horses…

-The “Rote Haus” bar which had a name I never could remember and where we only went a few times because the ceiling was so low it was hazardous to Ole, being a tall Norwegian. the same one that also had a sauna inside…(again, don’t ask)

-The other bar in a building that looked like Celia’s but was a bit further away and that we only visited once when I had couchsurfers from Norway and we drank too much and ended up there somehow. The one where that cute girl had a very short skirt and Ole kept longing over her legs.

-The other bar…-wait… no that’s it for bars…I think…is there ?

The gorgeous sunsets I witnessed every evening, just by looking through my window or with a cold Tegernsee Hellesbier, relaxing on my reinforced concrete Balcony;

But what I would miss the most would turn out to be the warm welcome, from new friends and old ones. From the people living on my floor who were all German excepting one (Hi Kate !!) and put up with communicating with me in English or my horrendous German. Allowed me to help with the floor activities. Made me drink at lot when we had competitions with the other floors;

The gorgeous Englischer Gardens right next door, where we could get lost hours upon hours with a few beers, or walk into at night and scare the crap out of Celia & Micha, who ended up stealing Ole’s shoe and our Vodka…

The place where I learned that volunteering as a bartender meant drinking as much as you could, so long as you can keep pouring 1L Maß just fine, which after a year I mastered…

The place where we later sat down with my local friends and the ones from Montreal who came to visit (Annick, Yannick, Vincent, Kim and Cynthia)  and we attempted drinking over 130 different types of beer in one sitting, failing miserably.

Where my friend Denise got one year older. 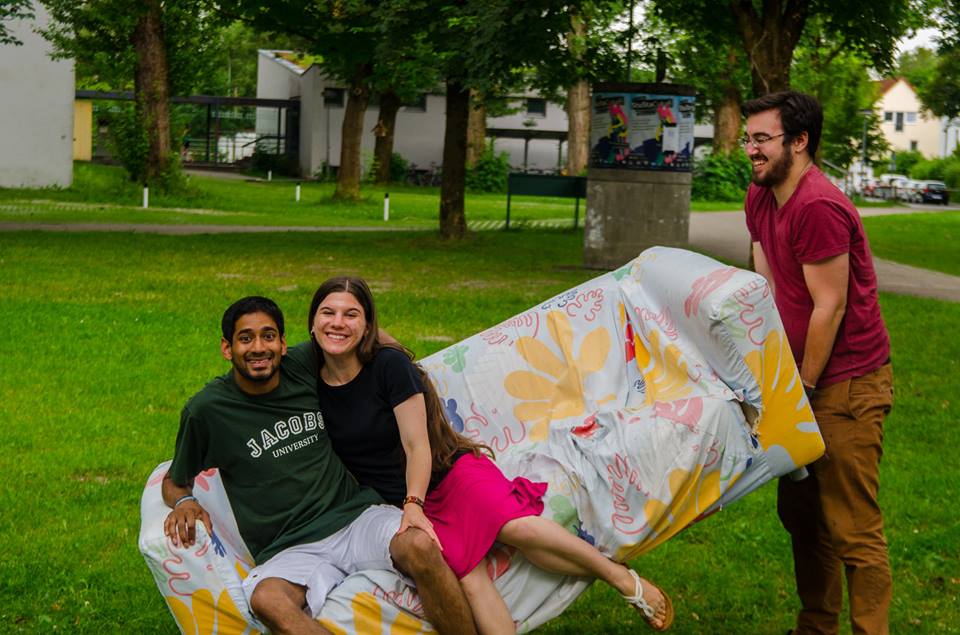 Thanks for being such an important part of my time in Deutschland und Bayern Stusta & Stustaleute.

That day, on my way to my meeting. I realized that while I still had a few months to stay, I’d already miss a tiny bit of Germany… I would miss my “12sq meter apartment” and it’s odd lifestyle.