Pretty much like regular Halloween, with fewer people participating and bigger parties it seems.

Many just don’t make plans and go with the flow. I was invited to 3 parties. A student one home, in Studentenstadt, one in another student housing spot in Olympiazentrum and one in a big big big (did I mention big) clubbing spot called KultFabrik.

Friends were participating to all three. Made plans to hang out with some local friends from my housing facility and then to hit KultFabrik with Bavarian friends from school. Since going out typically starts at 23:00 and finishes at 5:00 am in Munich, people usually go for a drink around 10 before heading to parties.

The thing is, the day following Halloween is a national holiday. The day of the dead. Where families unite together and visit their loved ones who passed away. It also means that it is legally forbidden to have jumbo steroid injected parties exceed  2 am the next morning.

As such, the drinking started for many as early as 8 or 9. I had no idea what to wear, did not want to invest much and am a bearded man and proud owner of a red checkered shirt. Figured I’d slap some suspenders on and get a plastic axe and go in as a lumberjack. I am Canadian after all, eh?

My other friend, a tall bloke, decided to just grab a creepy mask and a plastic “hand of death” thing and dress in black. At the club, later on, he would get all grabby with his creepy hand, playing in stranger’s hair and being generally weird. It worked out quite well I must say, props Ole ! 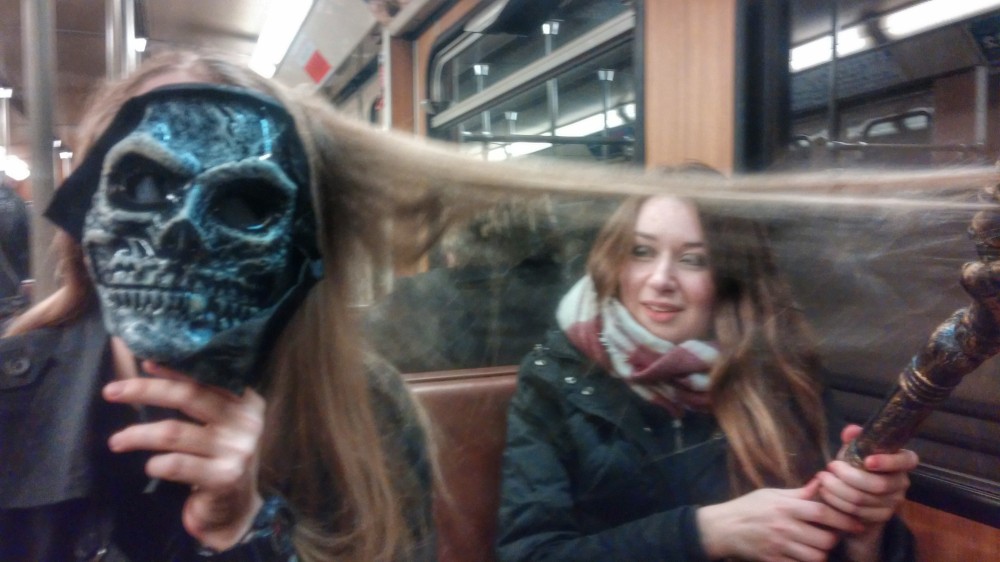 Later we hit the club (s), the two girls accompanying us decided to leave when they saw the number of people that were there, ignoring the fact that it was not one club but more like if a whole block decided to open clubs. You pay the entrance fee, and then, are free to roam in the alleyways of the club and bar town. If a place is too full or lame, you switch. Simple. Efficient. German?

Met up with one of my Bavarian friends who introduced us to her other friends. Basically just 3 girls with fake blood on em and face paint. Gets the job done if you ask me. Same level of trouble for the disguise as me and my friend with the creepy plastic hand.

Then we wiggled our butts around in a wave of people to techno remixes of “Black and Yellow” and such titles of musical ingenuity and auto-tune mastery (wasn’t expecting much more anyway) getting bumped around by drunk Germans with no balance, girls with costumes involving too very short skirts, broken glass all over the floor completing the portrait. Maybe I and my friend were just too sober to enjoy it fully.

The experience was fulfilling enough, to walk around in a place that is just clubs clubs clubs and see how the will to party can make places so crazy big and intense. 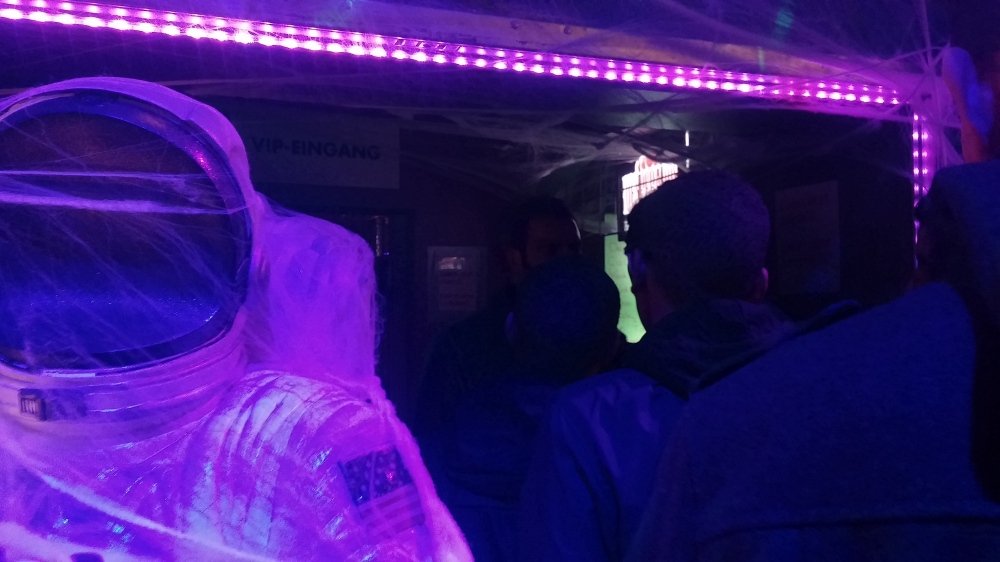 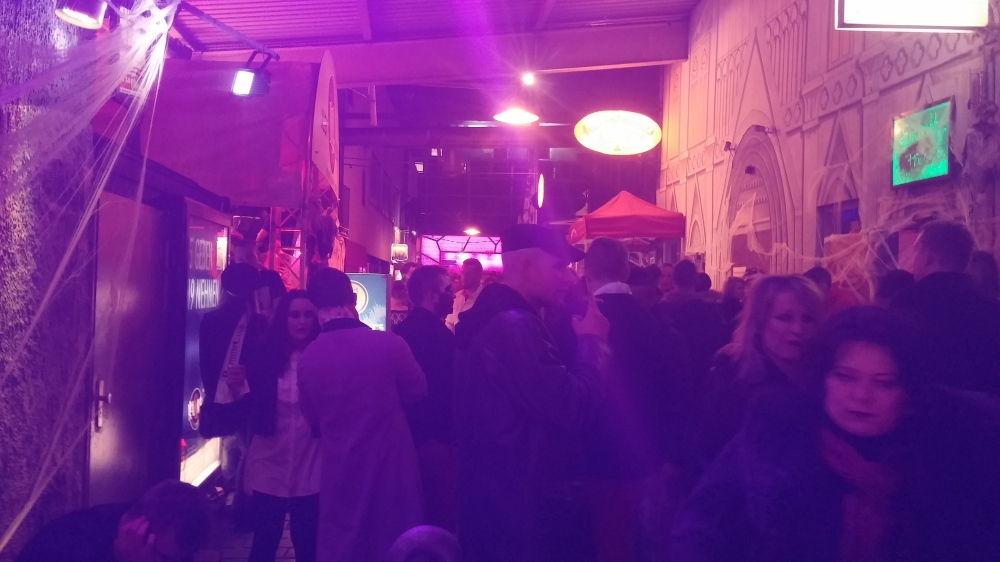 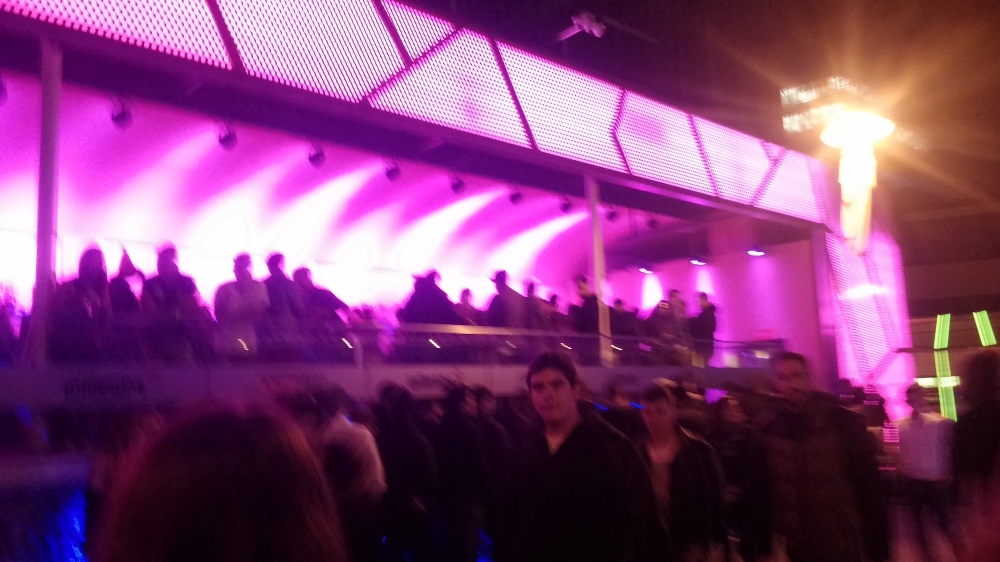 In the end, it sounded very much like regular Halloween excepting costumes were less the part and partying was more. Apparently some kids go trick or treating but seeing that München is almost 1.5 million people strong and yet, there is only one proper Halloween store the other options being the expensive department store and the Gothic store, i’d say these are exceptions to the rule that Halloween just is not as big in Germany as it is in other parts of the globe.

Just another party in Munich. . .