The most of us think that when you are travelling everyday will be a 7am to midnight day. Wrong. Sometimes it’s good to get up late and appreciate the day without jetlag.

Another day spent walking around in Dublin, getting in fancy two stories buses and all the European classics never had the chance to taste until today. The national botanical garden (Glasnevin, Dublin) is one of the nicest botanical gardens I have seen. Giant is a word that could be used to describe it, just like the short sentence “I kinda got lost”. In the end, it is just gorgeous, and to top it off, absolutely free ! 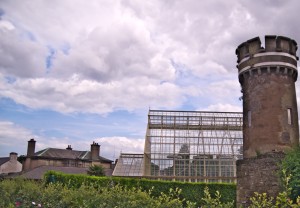 After hours of getting lost in the greeneries, we ask around for the best place to eat our actual first Irish meal (the botanical garden’s restaurant refusing to serve actual food past 4pm) and we are quickly directed to “The Tolka House”. A 100m later we are greeted by a cute Irish server who quickly notices that we are tourist with all the questions about the menu and such.

Much deliberations later, we settle on a three course meal for about 17 euros each. Starter, meal, desert.

Now now, we are in a pub so we are not expecting much.

Guillaume chooses a custom pizza topped with everything spicy ever dreamt of. Me and Mary opt for the Honey ham shank. As a starter I choose the mysterious “Brie and friends”, Marianne gets the “Irish full breakfast salad” and Guillaume goes for the potato and leeks soup of the day as extra, he’s too cool for the 3 course meal thing and chooses off menu.

The full breakfast salad arrives with the Brie thingy. Turns out that a fully breakfastable Irish salad is a bunch of mixed greens, topped with a portobello cap with an egg, black pudding and “dat bacon”. I explain. Black pudding is basically crispy blood/meat pudding, super tasty and super meaty. On the bacon side of things we mean business. Giant 4 american-sized large slices, perfectly crispy-but-not-dark meat tasting bacon slices. Hea-ven. Just heaven. Big, good, crispy, not burnt, not super oily and basking in fat. Just bacon, that you want to eat.

The Brie and friends was expected to be a small portion of brie cheese with bread and stuff. Turns out to be a roll, a big one, semi-fried, loaded with super good brie, small fruits. Framed by delicious salad. We are delighted. Guillaume’s soup arrives mid-point and as delicious as our two flavor packed, and next to main course sized, starters.

And suddenly the shank;

A giant piece of ham, on top of delicious mash surrounded by a discreet but tasty mustard based sauce. The ham is simply perfect. Crispy on the outside, sizzled in honey, with pink and juicy inside.

The problem ? There is too much to be eaten.

The server returns, a smile on her face: she’s carrying the crispy baked potatoes and red cabbage side dish.

Thinking she likes inflicting pain upon others, we slowly chow down what we could dub the best “pub” food ever laid upon our lips. Sinking our teeth in “The shank” letting it go down smooth with some nice cider. Guillaume washing down his fiery pizza with a pint of Smithwick’s
(Kilkenny’s Irish red ale)

Here you can see us waiting for our desert.

Long story short. Tasty food, couldn’t eat more than half. Pub food in Ireland can be better than good quality meals depending on where you eat. Oh and we also had desert.

Hahaha masochism. (What !?, it was included…)

We also got to leave with our leftovers… about half of the meal and side dish. Each.

Digestion wise, nothing like a walk in a gorgeously creepy cemetery. Not particularly creepy, just as any graveyard goes I suppose. Excepting one tombstone out of four is a variation of a giant Celtic cross and some of parts have Gaelic indications.

Wandered in it for close to a full hour and then took a cab to the hostel, not without hitting the local Lidl to feed the chocolate monster travelling with us (are every Germans like that ? It’s rhetoric, and fine, I really don’t mind an excuse to feast on dark chocolate all the time. Wow this is a really long parenthesis for a blog)