Setting off early morning, the wet air of Cork wakes us up despite the sunday-everything-is-closed lack of coffee. On our silent unsure way to the bus meeting point, we make sure to take a last picture of the beautiful
and welcoming township of  Cork. 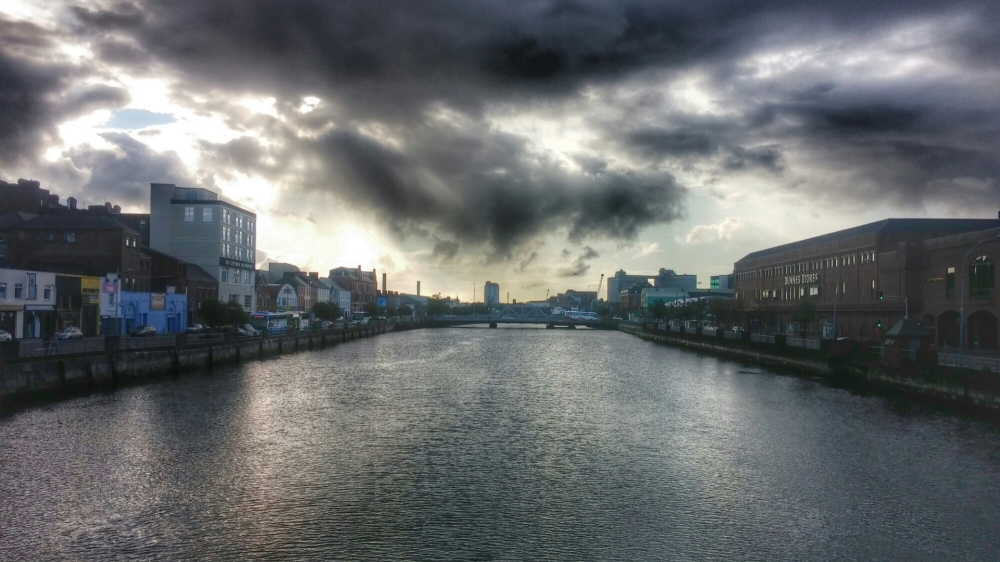 We took a tour bus for 6€ more (35€) as it stops plenty and provides more opportunity to visit than the regular bus to Galway. Including Limerick and brings us to the cliffs of Moher. A beautiful set of cliffs on the western irish coast I heard about but didn’t plan on visiting. The tour guide, when we got on the bus, kindly explained the difference between Galway and Galway Bay but said that he’d try to arrange for us to get to Galway instead of Cork at the end of the day. A few phone calls after lunch and we were set. A bus from another company, in good standing with Paddywagon or our guide, was to grab us at the cliffs.

Brief stop in Limerick, a city where I almost got to do my student exchange, but Munich was my first choice, which I got, Limerick was the last of four cities. We get to take a quick glance & HDR shot under the rain at the castle and we are back on the road. Passing multiple small townships and seeing true Ireland on the way. 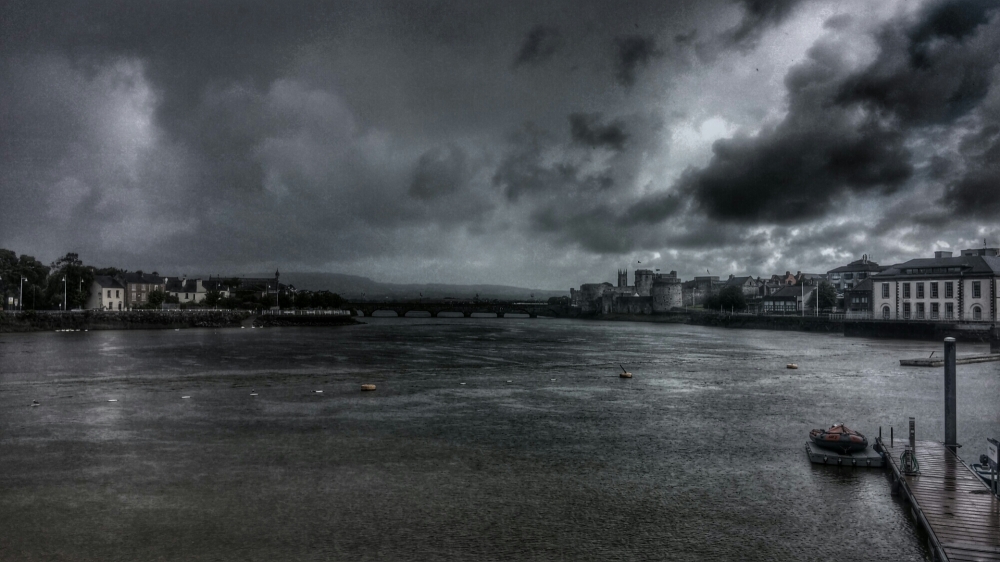 I do not know if all “Paddytours” are like this one but we all lift our hats to the guide, that is not only accurate, but quite funny and entertaining on top of,rocking the real Irish accent and cracking jokes in spanish. I would strongly recommand this tour to annyone, as much as seeing Cork.

We crossed in the Connemara province where there is the highest concentration of Gaeltacht , native Gaelic speakers. Beacause of the region’s poor agricultural value, it was never of great interest to the British Occupation. Cromwell was known to describe it as having “not enough earth to bury a man, not enough water to drown one and not enough wood to hang one”, thus being of little interest.

Then the Burren region on the coast, to the baby cliffs, near the largest natural limestone cliffs in Ireland; 90 square kilometers of limestone. 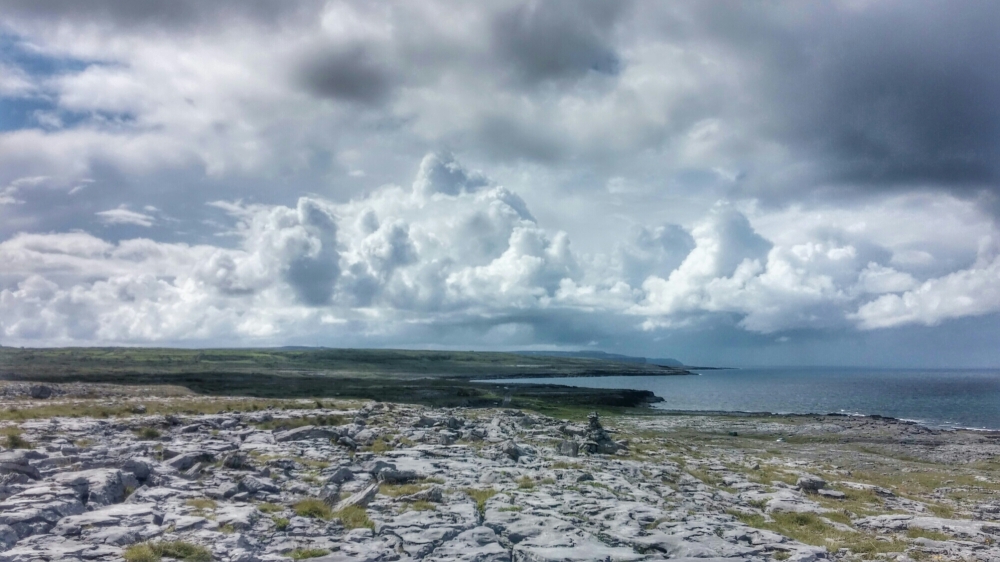 Next stop was the cliffs of Moher, which is Irish for ruined fortress as there was once a fortress there, but time and natural erosion made it wither away. 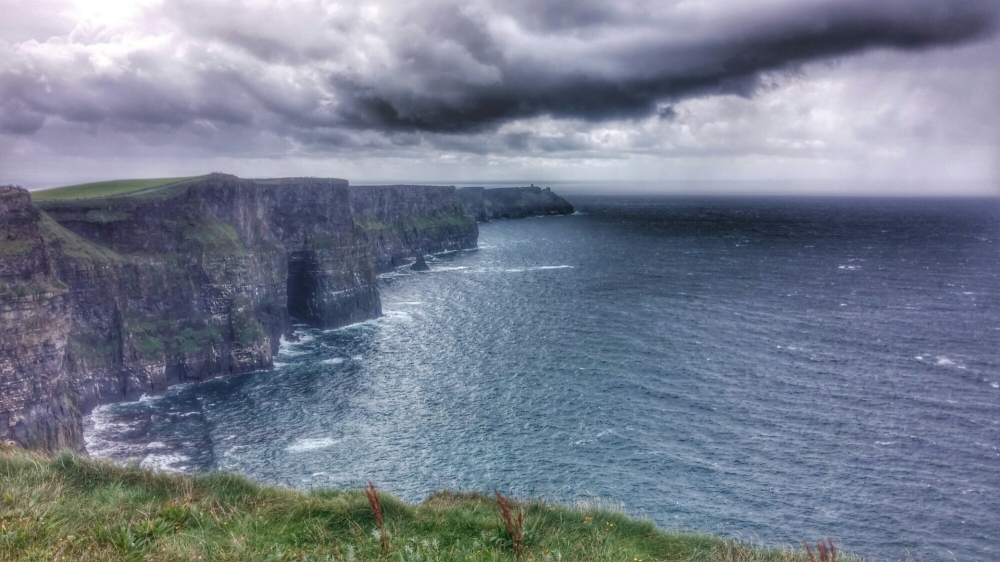 Very little remains from the nameless fortress. The ridge is steep, 700ft as a matter of fact, making it a deadly fall.

Of course, like everything nice theses days , it is very touristy but you are free to roam and take beautifull picutres of this one of a kind natural landmark of Ireland. One tip of the rift was particularly windy, so much in fact that you could fall in the grass or jump and feel half a second of “less gravity” kind of thing. Guillaume mentionned comming back with a wingsuit some day…

Our guide from Paddywagon was nice enough to contact a busing company from Galway to arrange a pickup with them from there in order for us to be able to make a straight trip there instead of going back to Cork and rebooking because of our mistake. Paul Healy, from Healy tours, gave us a ride with a bunch of foreign boyscouts, it was very nice to see competing companies “making it happen” for customers. Just like the shoeshop in Cork when in one hour time, an Irish shoe repairman fixed my rucksack for a mere 20€, on a few moment’s notice.

While Irish people in general seem stiff or direct when you ask them for directions, they never refuse and always make sure you got the directions right and clear enough despite seeming impatient. A strange mix of coldness but desire to help out. What the Irish do for you, they do well. And we were grateful on many occasions for that. (Mall employee giving me a huge box to ship my pack to Germany, post office employee for letting me strap the empty bag to the box to avoid paying 75€ twice, etc).

And then, an hour later, we were in Galway, planning the next day, Colemarra